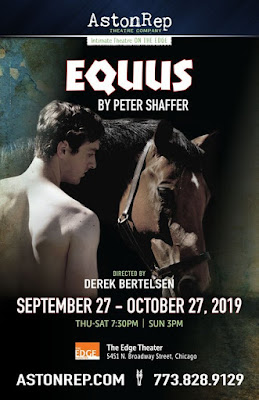 Aston Rep’s production of Equus represents everything local theater should be.

No, I didn’t quite award it a full @@@@@ on my Seth Saith scale, because there were aspects of Peter Shaffer’s Tony-winning 1973 play that frankly confounded me on an initial viewing.

So I can't purport to have been “perfectly” engrossed, enriched, enlightened or even entertained.

Still, I was delighted to have been indoctrinated to a classic of the theatrical canon—for such a famed title, Equus doesn’t seem to be staged all that often—and can’t readily perceive a more solid introduction.

Within Aston Rep’s nifty new Broadway home at the Edge Theater—OK, not that Broadway, but Chicago’s namesake street at Bryn Mawr—Jeremiah Barr’s set design is simple but striking.

And under the direction of Derek Bertelsen, the acting—led by Sean William Kelly and Rian Jairell—is superb throughout.

Based on a real incident that Shaffer had heard about and then dramatized in an attempt to somehow comprehend it, Equus—the name comes from the Latin word for horse—takes place in Southern England, ostensibly in the early 1970s when it was written.

Dr. Martin Dysert (well-played here by Jairell), a psychiatrist at a mental hospital, is convinced by a court magistrate (the always superb Alexandra Bennett) to take on the case of 17-year-old Alan Strang (Kelly, who is terrific).

In this "case," that word has not only psychiatric connotations, but also suggests a detective's investigation, as Shaffer's shrewd script blends introspective psychological drama with the sensibilities of a mystery thriller. 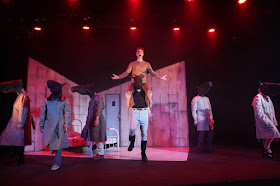 Quite heinously, Alan—who has been working, seemingly rather adroitly, as a stable hand—has blinded six horses with a spike.

Speaking not only to the young man but also to his highly religious mother (Julie Partyka), atheist father (Robert Tobin) and about a young female co-worker and paramour (Malia Hu), Dr. Dysert tries to ascertain why Alan did what he did.

Clearly, the psychological reasons, which seem to have religious, sexual and parental underpinnings and more, aren't obvious, and part of the mastery of Equus comes in depicting how the shrink's professional faith gets shaken.

I don't need to reveal any more of the narrative, and as I referenced above, there were parts of the 2-act play I didn't really understand as I watched, at face value or even to the varying depths Shaffer undeniably takes things. (A post-show perusal of the synopsis on Wikipedia didn't greatly clarify everything.) 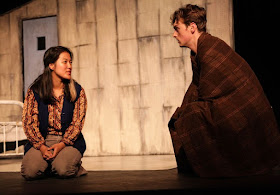 I tend to believe this means Equus is an even better play than I appreciated, and even with my confusion, its inherent quality was quite clear and abundant.

So I wouldn't mind seeing it again at some point, or maybe the 1977 film adaptation.

But especially for just $20, or even less via discounters HotTix, Goldstar and TodayTix, anyone who loves dramatic theater should relish the opportunity to see this production.

Over the last several years, Aston Rep has become my favorite storefront theater in Chicago, and now in an even more comfortable storefront, Equus stands with the best work I've seen them do.

Be forewarned that the show employs English accents--they waver a bit but are perfectly understandable--and contains some male nudity. 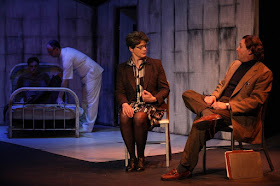 Neither is a reason to stay away, and even if you don't get to much theater, the combination of quality, setting and price point make this a perfect selection for which to saddle up.
Seth Arkin at 1:06 PM